About 756 million chickens are raised for meat and eggs in Canada each year. Produced in factories like mere things, they live short, nightmarish lives. Do you know where your food comes from?

Raised in crowded, dark barns, meat chickens first see sunlight on the way to slaughter. Many die en route. Birds used for breeding live for about 1 year and endure stress, confinement, and deprivation. Their offspring is killed for meat at just over 1 month of age.

Here is how chickens should live. This Canadian farm uses "loose housing". Birds have sandboxes, a variety of perches, and toys to play with. 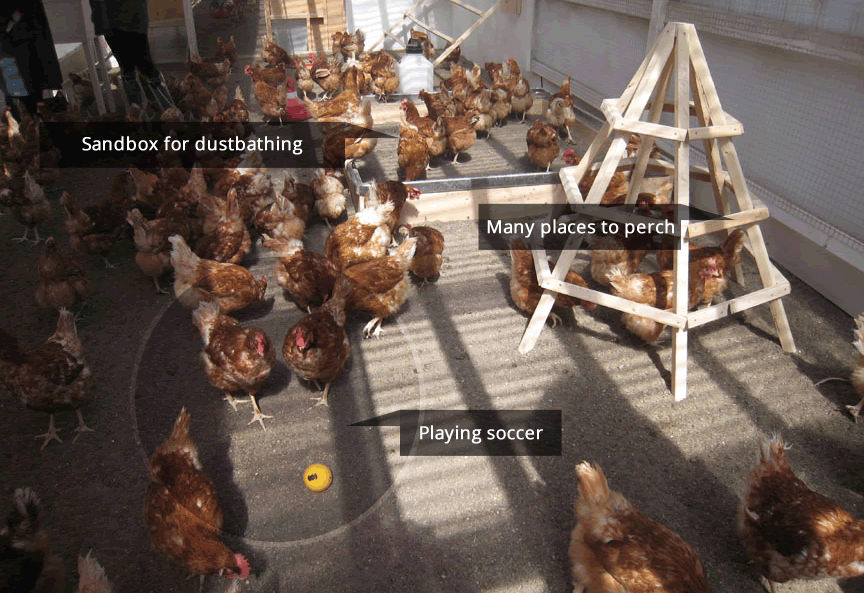 What is pecking order and why is it important?

Chickens maintain a complex social hierarchy by pecking each other. A well-defined pecking order is necessary for harmony in a flock and has wide implications. Example: hens learn more from higher status individuals, the same way we tend to value expert opinion. Learn more about important chicken behaviors.

The Five Freedoms is a core concept in animal welfare that originated in a UK government report in 1965 and was then refined by the Farm Animal Welfare Council. It states that an animal’s primary welfare needs can be met by safeguarding the following five freedoms:

In both magnitude and severity, [chicken production is] the single most severe example of man’s inhumanity to another sentient animal.

See why birds may freeze during transport or get their wings broken during loading.

See stages of the slaughter process and learn how many chickens are killed each minute.

Download a printable PDF brochure about meat and laying chickens.

Loblaw, Metro, Sobey's and Walmart Canada, Canada's four largest food retailers under the Retail Council of Canada umbrella, made a key announcement which will greatly improve conditions for Canada's laying hens: The grocers committed to not purchasing any eggs from hens kept in cages after the end of 2025. March 18, 2016

McDonald's has announced a ten-year timeline to switch to cage-free eggs at its Canadian and U.S. supply chains. Currently the two supply chains use more than two billion eggs from caged hens. The switch will improve life for nearly eight million animals per year. McDonald's has already implemented a similar policy in other parts of the world, including Europe. March 18, 2016

See our overview of the Maple Lodge Farms trial, plus a full report about the current state of chicken welfare in Canada.